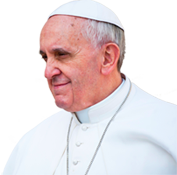 Pope Francis returned to his roots July 12 when he visited Banado Norte, a poor neighborhood near the Paraguay River where residents battle seasonal flooding and face possible eviction.

“I couldn’t be in Paraguay without being with you, in your land,” he told the crowd gathered outside St. John the Baptist chapel, one of 13 chapels in the huge Holy Family Parish. As archbishop of Buenos Aires, Argentina, Pope Francis ministered in similar neighborhoods.