News & Views
Check in each week to read interesting articles from Catholic writers, discover what Catholics are talking about in the wider world, find out what's happening in the lives of Catholic leaders, and keep up with the latest news from the Sisters of Bon Secours! 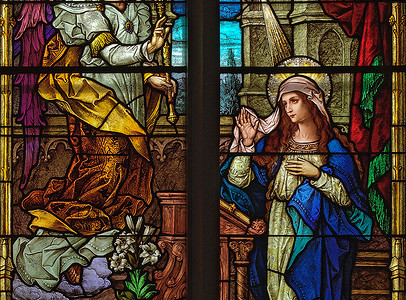 Today marks the Feast of the Annunciation, when the Angel Gabriel announced to Mary that she would be the Mother of Jesus. Mary said, “…May it be done to me according to your word.” She was able to clearly say yes to God’s request. We all know that doing God’s will is not always easy. We have our own plans, right? But like Mary, we must trust that God’s will is what’s best for us. Let us open our hearts and say “yes” to God. 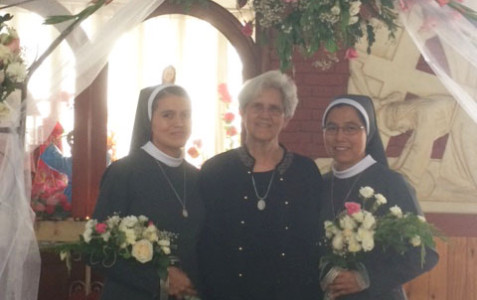 It has been a blessed week in Peru. Srs. Amabilia and Yovana made their Perpetual Vows – vows for life on March 19. After the vow ceremony, they went over to the convent, which was beautifully decorated with flowers, silk drapery and cakes. You see them in the picture along with our Congregation Leader, Sr. Pat Eck. Nearly all the sisters in Peru, as well as Srs. Pat Eck and Elaine from the USA, were able to come to Trujillo for the celebration. 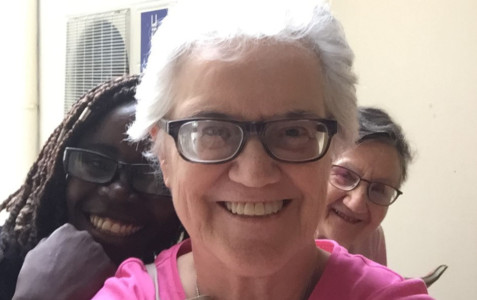 I am accompanying Sr. Jacqueline Rebours, our French candidate director, who has been discerning with women here over the last several years. This is our third trip to Kinshasa.
Various images may come to mind when you think of the Congo. Images of dense jungle, wild life, boats slowly making their way up rivers flowing past small villages, hot and humid (the heat index is 110 today). This is true. What I didn’t picture was Kinshasa, a huge city of 8 million people with housing compacted onto tracts of land, such as ‘Chinatown’ so named because everywhere you look there are people.
We have met with four young women discerning a call to religious life and Bon Secours over the last two days, and have begun to meet their families as well. We will meet three or four others in the week to come. Like other young women discerning a call to religious life, Miriam, Elena, Elvie, and Mariel have a generous and compassionate heart for those who are poor, or are suffering, or in need someway. They dream of making a difference for people. They find a loving God who nourishes them and nudges them to follow him more closely and to be of service to their brothers and sisters.
Here is a picture of Elvie with us. She is in a master’s philosophy program and dreams of improving the Congolese education system for young people. I’ll have more from Congo coming up, along with photos journaling our trip.
Blessings from the Congo.
Sr. Pat 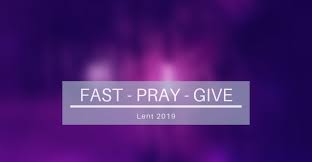 It’s hard to believe, but Ash Wednesday is just five days away, when we begin the season of Lent – a time to take stock and refocus our hearts on our love for God and one another. Lent is a time of fasting, almsgiving and prayer. There’s nothing tricky about prayer. It’s simply tuning in to God’s presence. And God is always present. Not only alongside us, but within the deepest part of who we are. We’re made in the image and likeness of God, and when we pray, we become closer to Him. We don’t have to figure out the right words to get started, because God is always speaking to us. Have you ever tried just sitting quietly with God? It’s a fine way to spend a few minutes. 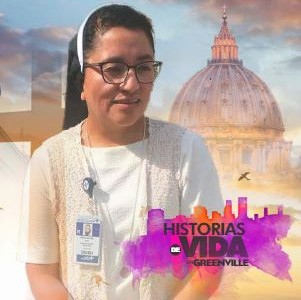 Her name is Gabriela Ruiz Espinoza, native of the north coast of Peru, where in her own words, is the place where beautiful ceramics are crafted and exported, delicious northern ceviche is prepared, the people are super celebrative, and there is a lot of human warmth.

Sister Gaby, as people call her, or simply Gaby, doesn’t use titles, much less feel distanced from people. She feels like just another woman who shares her life and work in this multicultural context where people learn and marvel at the richness that each culture possesses and the people share in its essence and profundity.

Gaby, a religious sister who for 28 years has belonged to the congregation of the Sisters of Bon Secours, whose motto is compassion, healing, and freedom, comments that the consecrated life is an invitation from God to live a Christian vocational experience in which we all take a determined place in the work of announcing and building the Kingdom. She adds that, in addition to the formation of the consecrated life, the vocation is a grace by which God consecrates the life of whoever decides to follow Him and prepares him to live out his faith in community. She adds with satisfaction, “The consecrated life is the result of a vocational process that becomes mature. God’s calling is heard and is responded to with loyalty and obedience.” Giving a hint of a smile, she says, “God chose me out of pure compassion, and the religious vocation is truly a gift that God gives to the church and to the person who receives it. One just has to live this call in gratitude, with love, and give oneself to God and to the brothers and sisters, no matter what culture or religion they profess, to serve others without distinction.”

Gaby and Sister Rosa came together to the United States, invited by Bon Secours Health System, whose hospitals Saint Francis Downtown, Saint Francis Eastside, Cancer Center, and Millennium belong to the work of the congregation and were the agents to start a mission so that the sisters of Peru could come and share the charisma and spirituality of the congregation to the Hispanic community and interchange community experiences with the sisters who are natives of this beautiful country.

The mission is for five years; Gaby has two more to complete. This woman of small stature, a luminous face, and a big smile, feels proud to be a part of her congregation and lovingly pours herself into serving the Latino community in Greenville through the Cancer Center, where she gives the best of herself. Her vocation of service, which aims toward helping others, has led her to volunteer her time in the Catholic churches San Sebastian and Saint Mary Magdalene. Gaby and her companion interchange experiences and share their own traditions in a world that feels close to home thanks to the love that they give and receive.

Gabriela is the spiritual support system of the Hispanic people, as much in the hospital as in the Saint Francis Hospital offices that are in the San Sebastian church. Gaby is a person who wears a habit, the same dress that her Peruvian sisters use, but according to her, “my habit allows me to get closer to people, and for me, is a symbol that I use joyfully.”

Prepared for the Mission

Gaby has taken courses in philosophy, theology, and religious education, has a bachelor’s degree in clinical psychology, and has a diploma in human sexuality, which means to her that she provides spiritual support to all of the people who cross her path. She cannot practice her profession in this country because she doesn’t have certification and “respect[s] very much the mission that the hospital entrusted [her] with as a sister of Bon Secours.”

Greenville won her over because of the kindness of its people, the tranquility that she feels, and she likes it above all because she can interact with people from different cultures. She hasn’t had problems with the language because her work is focused on the Latino community. Her English is basic, and while she’s tried to learn it, sometimes she needs more patience and perseverance. She recognizes that she has been in her comfort zone with respect to the language because she doesn’t possess sufficient vocabulary and “gets stuck” in thinking about how to start a deeper conversation in English, so she then comes to the conclusion that maybe she will never be able to sustain a fluent conversation in the language that she loves and dreams of speaking one day. The experiences of a person consecrated to God and to the church are innumerable. To Gaby, they are etched in her mind because people remind her of the comfort they feel; they are thankful to her because she listens to their problems, sorrows, and hardships. Therefore, she feels satisfied and wants nothing else but to give thanks to God because, in addition, she says like the servant, “I have only done what I was sent to do” (Lucas 17:10). However, Gaby reflects that “the consecrated vocation is more about being than doing, and it’s because of that that the church receives our consecration. It does not ask ‘what are we doing’ or ‘if we are useful,’ but rather, if we announce prophetically with our lives that God is the Greatest Good and that there is nothing more precious than to consecrate oneself to Him.”

Aside from dancing and playing volleyball, Gaby loves to read and is always looking up new information and at the same time enjoys gaining more knowledge of the new postulates that emerge in the world. She has a profound interest in the stimulation of a gland that we have in the center of the brain, which is in charge of generating the hormone of the eternal youth and regulating the cycles of sleep and wakefulness: the pineal gland. She comments excitedly that someday she will learn the technique and will apply it to her everyday life because she feels like it would be very useful for her.

Message for the Youth

“I would tell all young men and women: do not be scared of responding to God’s call that He is making in the depths of your hearts. Have the boldness to search for it, whatever you feel called to, because a lot of times you stay in silence, embarrassed, feel like you’re getting too old and you don’t dare to talk about it. I invite you to go farther; I invite you to discover ‘what is my vocation that I am being called to?’ Because I assure you that when someone falls in love with Christ, they are never going to leave Him and they are going to want to follow Him in the vocation that they have discovered because Christ, Christ will always fill their hearts.” 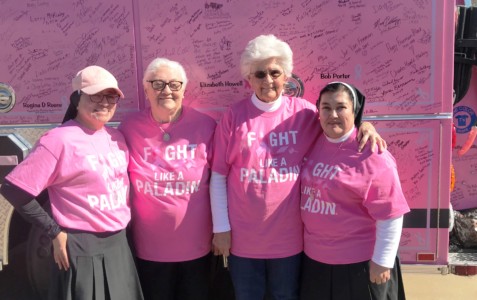 Four Sisters of Bon Secours served as honorary coaches and ball carriers for the women’s basketball game at Furman University in Greenville, South Carolina this past Saturday. Streamed live on ESPN3, the event marked Furman’s annual “Play4Kay” fundraiser in support of the Kay Yow Cancer Fund for breast cancer awareness and research. The fund was founded in 2007 in honor of the former NC State University head women’s basketball coach. Cancer survivors and those fighting the disease were admitted free. For each ticket sold, $3 was donated to the Kay Yow Fund, and the first 300 fans admitted to the game received a free pink T-shirt sponsored by Bon Secours St. Francis Health System. 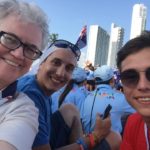 Tuesday evening, January 22, 2019, was the opening Mass for #WorldYouthDayPanama2019  pilgrims from all over the world. It was an awesome cultural experience of young adults celebrating our faith together with joy! I made two new friends from Argentina (Francesco and Sean). We exchanged small gifts – I gave them a #SistersofBonSecours prayer booklet (they wanted them signed), and I received a half decade rosary. 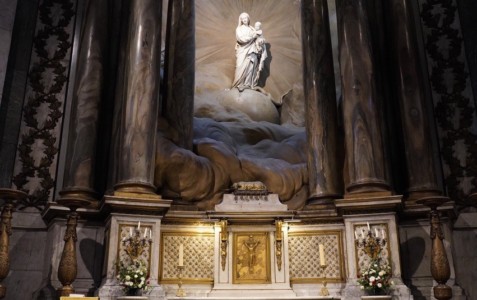 Today is the Feast Day of St. Sulpice. St. Sulpice Church in Paris is a landmark in the sisters’ history because it is where the original 12 sisters who formed the Sisters of Bon Secours in 1824 took their vows. St. Sulpice was the son of wealthy parents, who devoted himself from a young age to good works, especially the care of the poor. In the church in Paris, there is a plaque on the chapel wall commemorating the sisters’ founding. 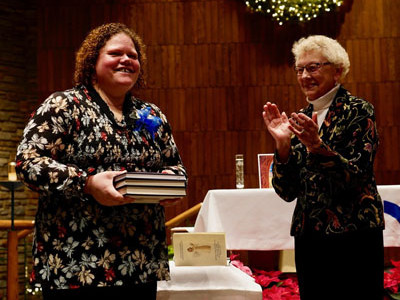